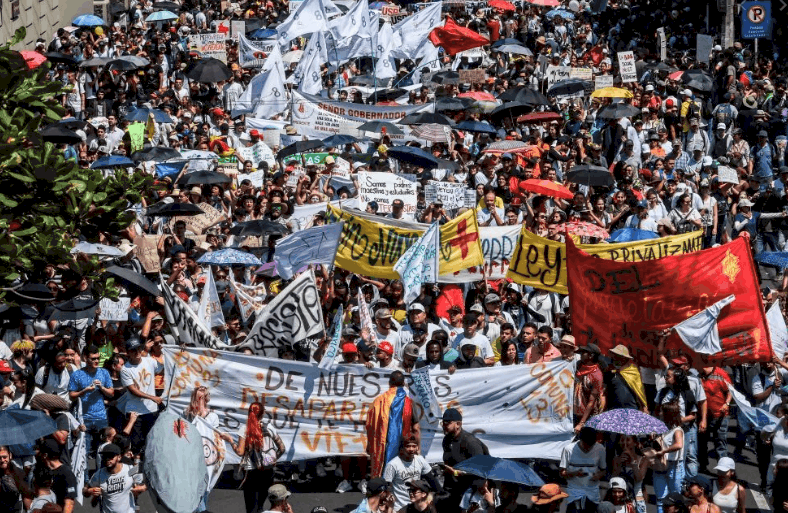 Since 21 November 2019, protests have been held throughout the country against the current government’s employment, welfare and security policies. Demonstrations mostly affect the main urban centres, including the capital Bogotá, Cali, Medellin and Cartagena and have often resulted in acts of violence, vandalism and clashes with the police (that have frequently used force to quell the protests). Although President Duque has immediately been in favour of dialogue with the protest leaders, since 26 November, the death of Dilan Cruz – a young man who had been seriously injured by a teargas canister – has given a further boost to the protest movement in the country.

In the wake of the ongoing mobilisation in the Latin American region, Colombian demonstrators are generally protesting the government’s neoliberal policies. Protesters’ demands include the cancellation of the tax reform currently being discussed by the Congress, the cancellation of the pension reform and the elimination of Esmad (the police riot control unit), accused of excessive use of violence. Protest organisers, that include trade unions and student and indigenous organisations, have called an indefinite strike following President Duque’s unwillingness to meet their demands. However, the turmoil affecting the capital Bogotá and the main urban centres of the country has pushed Duque to maintain a direct dialogue with the demonstrators, whose (uncertain) outcome could impact government stability. In the wake of the achievements of the Ecuadorian and Chilean mobilisations, protests will unlikely end in Colombia before demonstrators obtain real and tangible concessions from the government; for its part, the government, which has been in office for about a year and a half, currently has an approval rating of just 26%.

Against this backdrop, the attack which was carried out on 22 November against the police station of Santander de Quilichao was initially linked to the episodes of violence currently occurring in the country. However, subsequent investigations have confirmed the responsibility of FARC dissident groups (Revolutionary Armed Forces of Colombia), engaged in recent months in a renewed campaign of violence in Valle del Cauca region. In line with the established terrorist strategy adopted by the aforementioned criminal groups, the action targeted the local authorities in the region and caused the death of three agents.

Specifically, the raid was carried out by launching four explosive devices from a truck specially equipped to carry out the action and it was attributed by the Colombian authorities to the dissidents of the “Columna Móvil Dagoberto Ramos”, part of the “New 6th Front”, particularly active in the northern area of Valle del Cauca Department. The criminal organisation, which can count on about 120 units and whose leader is Fernando Israel Méndez alias “el Indio”, controls coca and marijuana plantations in the area, focusing mainly to drug trafficking and illegal mining. Their power in the northern region of the department is shared with the dissidents of the “Columna Móvil Jaime Martínez”, led by Leider Johani Noscue aka “Mayimbú”, with which it shares the management of the so-called Marijuana Triángulo de Oro, located in the area of Miranda, Caloto and Toribío.

The two groups are allegedly responsible for the recent six murders that have shaken Valle del Cauca department since 1 September, including the murder of Karina García Sierra, candidate as mayor for the liberal party in the town of Suárez. After the episode, attacks are on the rise, in particular against the indigenous leaders of the region who, through the self-defence body “Guardia Indigena”, defend the territories inhabited by their communities from gangs dedicated to drug trafficking. Among the most relevant events, it is highlighted that of 29 October, which took place in Tacueóó di Toribío reserve. The attack resulted in the death of five indigenous guards including Cristina Bautista, governor of the reserve. Forty-eight hours later a new deadly assault occurred in Corinth, against a team of four topographers engaged in a report in the area.

In response to the violence, Duque has added 2,500 more security forces to the 8,000 already deployed in the region. However, the indigenous communities have criticised this decision and instead stress the need for structural reforms.

The attacks perpetrated in the last two months show the effective structuring and organisation of dissident criminal groups and pose serious risks to the security of the country. In late August, a dissident wing of the FARC led by Luciano Marín Arango aka “Iván Márquez” (considered to be among the main leaders of the former guerrilla) had announced the resumption of the armed conflict by video message. From that day on, doubts about the effectiveness of the 2016 Peace Agreement arose in the country, although it has put an end to a civil war which costed about 220.000 deaths and allowed the disarmament of about 10.000 fighters. The fear of a potential increase in the attacks became even more real in early October, when another cell of the former FARC, the “18th Front”, joined the dissidents and provided them with a precious alliance in the departments of Antioquia and Cordoba.

At present, there are around 3,000 dissidents (in fact, less than a third of the demobilised forces). However, it is also necessary to consider the militants of the insurgent groups that did not lay down their arms in the aftermath of the 2016 agreement. Among these, the guerrillas headed by Miguel Botache Santillana aka “Gentil Duarte” (which operate in the western departments of Valle del Cauca and Antioquia and in the eastern departments of Arauca, Vichada Guaínia, Vaupés, Guaviare and Caqueta) as well as the Ejército de Liberación Nacional (ELN), whose members are constantly increasing in the last three years (the same could happen for the new dissident forces). The ELN, which operates mainly in the eastern departments of Norte de Santander, Arauca, Cesar and Casarane, can count on about 4,000 fighters, who, if allied with the cells which have left the 2016 Peace Agreement, would constitute a guerrilla force of around 7,000 units.

While on one hand, doubts persist on the fact that these alliances can actually be implemented, it is clear that dissident elements can represent a threat to the country stability. This criticality also appears to be more urgent in light of the ability showed by the mentioned groups in expanding beyond their original areas of activity, with the aim of creating new alliances and establishing further routes for drug trafficking. This appears to be the case of the ELN which has extended from the traditional eastern areas to the western departments of Chocó and Antioquia where, through the alliance with the dissidents of the 18th and 28th front (respectively headed by Ivan Marquez and Gentil Duerte) seeks to establish a new route that connects the Pacific Ocean to the neighbouring Venezuela.

The reasons for the ongoing protests in Colombia include all the security-related issues highlighted so far, also in regard to the numerous local indigenous communities. The reason why indigenous leaders criticise the current government is the ineffectiveness of the Peace Agreements signed in 2016 in Havana; far from leading to a post-conflict situation and full disarmament, the agreements have instead ushered in a new wave of violence against the indigenous communities in those regions where government presence is weak, such as Valle del Cauca.

In conclusion, the above suggests that the Colombian security situation will remain volatile. Several factors are likely to impact Colombia’s short- and medium-term security environment. First and foremost, the ongoing protests could further affect the political and social stability of the country, especially if the measures adopted by the government fail to meet the population’s requests. In this context, the weakening of the current government could impact government action in terms of effective security policies and fight against organised crime and insurgent groups in the country. In addition, Colombia’s future security situation will necessarily also depend on a possible change in alliances and power balance within the network of dissident groups in the medium term. This last aspect could be partly influenced by regional developments, and in particular in regard to Venezuela: should Maduro remain in office and even strengthen its influence on institutions, Colombian dissidents could continue to be supported in terms of arms and strategic organisation; otherwise, Bogotá could hope for a new government to be set in Caracas that is able to fight Colombian dissidents in Venezuela and ready to cooperate in securing the border between the two countries.